Login
All prices inclusive of VAT If you have questions or wish advice, do not hesitate to contact us: +49 8247 39 56 30
Menu
HomeRiderDVDBurghley 2013 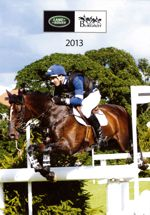 This year's big question centred on how 67 partnerships from 11 countries would manage the newly designed 'Start and Finish' of Captain Mark Phillips' cross country test: in particular the intensity of the first five minutes. In the dressage phase it was Jonathan 'Jock' Paget and Clifton Promise who set the pace, with Ingrid Klimke with FRH Butts Abraxxas on their Burghley debut attracting less than 40 penalty points. William Fox-Pitt in fourth place, led the British challenge on his 2011 Burghley Champion Parkland Hawk. The final day brought early disappointment for Jonathan Paget having to withdraw but with one showjumping fence in hand over both Andrew Nicholson and William Fox-Pitt, the overnight leaders still had the chance to emulate Ginny Leng and Master Craftsman, the last horse and rider partnership 24 years earlier in 1989 to win both Badminton and Burghley in the same season. Presented by Clare Balding. Approx. 131 mins.