Login
All prices inclusive of VAT If you have questions or wish advice, do not hesitate to contact us: +49 8247 39 56 30
Menu
HomeRiderDVDRolex Kentucky Three-Day Event 2012 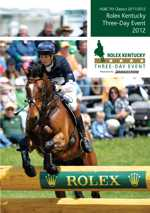 57 combinations set out to win this year’s first 4 star event at the Kentucky Horse Park and as usual there was a strong overseas entry headed by the Land Rover Burghley 2011 winner William Fox-Pitt and Catherine Witt’s 12 yr ex New Zealand racehorse Parklane Hawk.

USA’s Allison Springer led the way after dressage being the only competitor to break the 40 penalty barrier but Fox-Pitt was well in touch and Derek Di Grazia’s cross country course brought out the very best in the British ace as he and Parklane Hawk flew round without penalty. A few time faults dropped Alison Springer below Fox -Pitt and that’s how it stayed after the showjumping as each of the first two lowered one pole. This was Fox – Pitt’s third major win in a row following Burghley and Pau in 2011 and the second leg of the Rolex Grand Slam. However, with the cancellation of the Mitsubishi Motors Badminton Horse Trials he will have to wait until Badminton 2013 to see if he can pick up the $250,000 prize on offer from Rolex. Approx 52mins duration.