Login
All prices inclusive of VAT If you have questions or wish advice, do not hesitate to contact us: +49 8247 39 56 30
Menu
HomeRiderDVDBurghley 2012 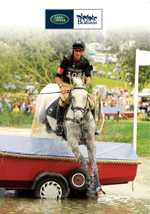 Burghley 2012 The Land Rover Burghley Horse Trials 2012 Review DVD captures the atmosphere and thrills of this fantastic event. Burghley’s popularity reached new heights in 2012 with a record attendance of 178,000 fans and no less than six previous Burghley Champions and seven London 2012 Olympic medallists among the eighty five entries from eleven countries.

American rider Sinead Halpin with Manoir de Carneville were the only partnership to post a score of under 40 penalties in the dressage and took the lead after producing by far the most fluent and accurate test.

Best on cross country day was again Sinead, with Andrew Nicholson moving up into second place with Avebury, close behind the defending champions William Fox-Pitt and Parklane Hawk and Oliver Townend and his new ride Armarda.

With less than eight penalties separating the top four on show jumping day, who would hold their nerve to take the £55,000 first prize: could Sinead become only the third American rider to win the Burghley title, might Andrew add to his two previous successes or would William achieve an incredible seventh Championship with Oliver also very much in the running for what would be his second title.