Login
All prices inclusive of VAT If you have questions or wish advice, do not hesitate to contact us: +49 8247 39 56 30
Menu
HomeRiderDVDHSBC FEI European Eventing Championship 2011 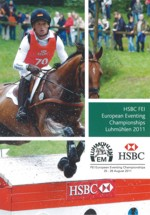 Great Britain were going for an unprecedented 9th successive team title at the 31st running of these championships held at Luhmuhlen in Northern Germany but came up against a host nation team in irresistible form which swept all before them.

Germany dominated the dressage leaderboard with five in the top ten, including World Champion Michael Jung and La Biosthetique Sam, the favourites for the individual title. He lay in second behind team mate Ingrid Klimke and Butts Abraxxas and they maintained their scores and positions after cross country with faultless rounds. However in the show jumping whilst the World Champion jumped the inevitable clear round Ingrid suffered the agonies of 6 poles down to let in team mate Sandra Auffarth for Silver and Individual rider Frank Ostholt for the Bronze to complete a German clean sweep.