Login
All prices inclusive of VAT If you have questions or wish advice, do not hesitate to contact us: +49 8247 39 56 30
Menu
HomeRiderDVDBadminton Horse Trials 2011 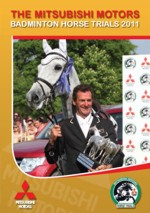 The 62nd running of the Mitsubishi Motors Badminton Horse Trials took place for the very first time over the Easter weekend. 82 combinations set out on the 4 days of competition held in glorious sunshine and summer-like temperatures. The field included 7 previous winners of this most coveted of titles including the oldest of the former champions, 3 times winner Mark Todd, who at the age of 55 became the oldest rider to win at Badminton, riding the 10 year old NZB Land Vision, 31 years after he first won on Southern Comfort in 1980. In a nail biting finish there were 12 combinations within a fence of each other going into the show jumping but Toddy was in the driving seat having taken the narrowest of leads after the cross country and he was not going to be denied this fairytale victory as he jumped a clear round on the final afternoon to the delight of the capacity crowd.

Extensive coverage of the cross country is sandwiched between highlights of the dressage and show jumping.